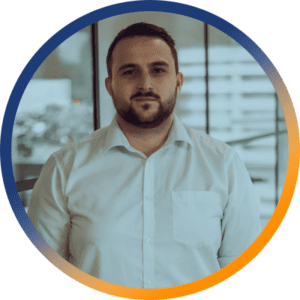 Charles is our recruitment consultant within the Permanent Management Team at Boden Group. He specialises in the placement of operational management candidates in Hard/Soft and Total Facilities Management roles across the UK.

But it’s worth bearing in mind that zoom was launched back in 2013, and was officially designated a unicorn, attracting millions of dollars of investment by 2016. And back in 2019, before Covid hit, people were already consuming, on average, 84 minutes of video a day.

Certainly, the pandemic has sped up the appetite for increased video usage, but this was a trend in the making more than five years ago, visible for anyone who was looking.

The recruitment industry, however, was largely not looking. Having been, on the whole, resistant to video technology as the trend towards video was rearing its head, the industry has been required to make quick adaptations over the past 18 months.

And though the recruitment industry had been resistant to embrace video interviewing before the pandemic, once it became a necessity, the sector has seen the huge potential is has.

There’s no denying that using video interviewing has sped up the recruitment process. Organising face to face interviews and co-ordinating the diaries of those on the hiring panel with multiple candidates, ensuring time for travel, and often trying to keep all interviews within a couple of days was a challenge, and often meant waiting days or even weeks between shortlisting, first and second round interviews.

Arranging interviews by video has opened up far more flexibility for all involved. Interviews can be arranged in lunch breaks or after work, and candidates don’t need to block out extra time for travel.

But in terms of innovation, video has a lot more to offer than video interviewing, and the recruiters who work this out will be the ones who really see the value from their investment into video.

These are words we use a lot here Boden. In fact everything we do also comes with the question "how can we make sure we're prioritising diversity?" Video can play a massive role in making sure that processes are inclusive. Neuro-diverse candidates are able to perform at their best in surroundings they feel comfortable in. Disabled candidates can interview without the added concern of accessibility.

And more than that, presenting videos of candidates alongside they CV can demonstrate skills, articulation and personality far beyond a piece of paper. This can help to overcome unconscious bias within the early stages of the process.

A video application for a role can really help a candidate to shine. Some people are far better at selling their skills verbally than they are on paper. Giving them the opportunity to talk through their experience can help show up their passions and motivations, and help a hiring manager really see what makes them special.

At a time when candidates can take their pick of roles, having a way of standing out from the crowd is no bad thing. A video job description gives you the opportunity to show why you’re a great place to work, as well as describing the particulars of the job and the kind of person you’re looking for. You can include snippets from current team members talking about some of the projects they’ve worked on and what they enjoy about the job.

Longer form video can be fantastic way to communicate who you are as an organisation. During the interview process, candidates will only meet a couple of people, and usually they're senior members of staff. Hearing from their peers will help candidates to see if the team is one they could fit into. It's a great way to display the culture of the wider company, and communicate the brand personality more visually.

Brands like Innocent and Starbucks utilise video to put their employees front and centre. They use video to bring to life their culture, their CSR and their community values. All these things work together to help a potential employee feel like they know the business, and would be a part of something great.

Video interviewing and video technology has the ability to make the world a smaller place. With remote and home working becoming a more common feature of employment, your options are far wider than they’ve ever been before. You can have people in your team who live on the other side of the country or even further afield.

Video interviewing is the tip of the iceberg

Hopefully, you can see that the potential the video has within recruitment, far beyond video interviewing. With a bit of time investment, it can revolutionise your hiring process, increase your reach and open up a whole world of new candidates for you. If you want more information or help on how to use video within your recruitment process, reach out and we’ll happily chat through your options.

This website uses cookies to improve your experience while you navigate through the website. Out of these cookies, the cookies that are categorized as necessary are stored on your browser as they are essential for the working of basic functionalities of the website. We also use third-party cookies that help us analyze and understand how you use this website. These cookies will be stored in your browser only with your consent. You also have the option to opt-out of these cookies. But opting out of some of these cookies may have an effect on your browsing experience.
Necessary Always Enabled
Necessary cookies are absolutely essential for the website to function properly. This category only includes cookies that ensures basic functionalities and security features of the website. These cookies do not store any personal information.
Non-necessary
Any cookies that may not be particularly necessary for the website to function and is used specifically to collect user personal data via analytics, ads, other embedded contents are termed as non-necessary cookies. It is mandatory to procure user consent prior to running these cookies on your website.
SAVE & ACCEPT